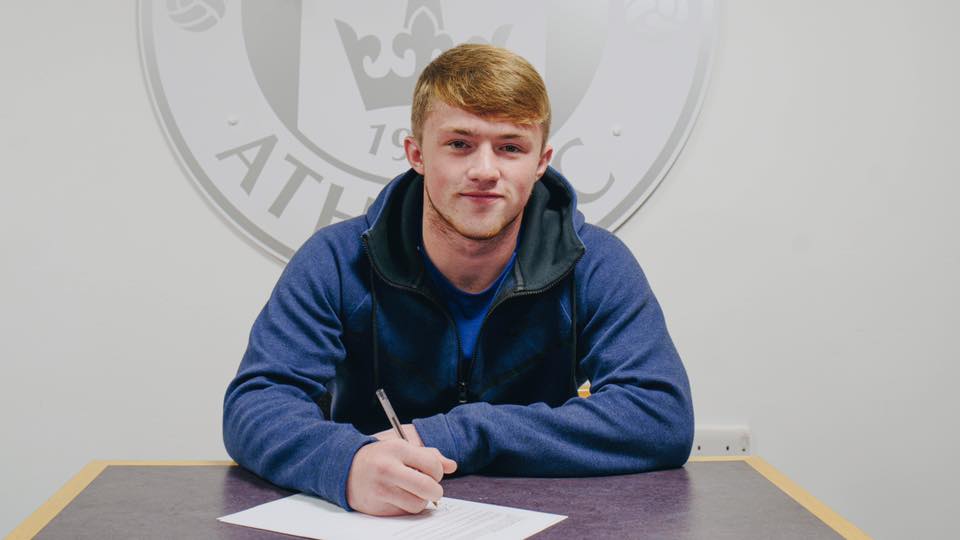 Congratulations to Joe Gelhardt who has signed a new long-term contract with Wigan Athletic. The 17-year-old cited the Academy staff, his family and Latics supporters as the reasons why he’s enjoying life at the club.

“I’ve been at this club since the age of 10, it’s nearly eight years in February that I’ve been making my way through the Academy.

“The first thing I want to do is thank all of the staff at the Academy. They’ve taught me everything coming up as a young player. I’ve got to thank all of my family as well, they’ve supported me growing up, so we’re all over the moon that I’ve committed my future to this club.

“I’m always training my hardest and playing my best for my family, they’re my motivation, so signing the contract with my Mum sat next to me was a great experience.

“I’ve had eight years here, but before I joined the club, I was rejected three or four times by local teams like Liverpool and Everton.

“The experience I’ve had at Wigan on the way up the age groups has been really good, but I’ve had to work very hard for it.

“It’s a great privilege to play for this club. I enjoy coming into work every day, it’s a great environment. I love working with all of the staff and the senior players have always been very welcoming.

“The fans have given me a big boost with their messages of support. I just like being here, which is why I’ve extended my contract.

“It’s a big confidence boost when I hear the fans singing my name, it gives me that extra percentage and I want to do my best for the fans when I play. The fans are great. I love the fans.”

Gelhardt, who made his league debut in the Championship away at Birmingham City in the penultimate game of the 2018-19 season, stepped up into the first team squad at the start of this season, something he said he’s worked hard to adjust to:

“It’s been my first season in the first team squad and it’s been good to get on the bench and make a few appearances. It’s been very beneficial for me and I’ve been involved a lot more than I thought I would be, so I’ve just got to carry on working hard.

“The goal at Hull was a surreal experience for me and my family. It’s unfortunate that the one game they couldn’t make it to, I scored in, but I’m sure they were enjoying it from home.”

“There are a few characters in the dressing room, some really funny people. Obviously it’s a bit different from being with the Under 18s, but I really enjoy it. Everyone’s been great with me and they made me feel very welcome at the start of the season.

“It was a big jump coming from the Under 18s to the first team, physically more than technically, but my body has become used to it. Pre-season was tough, but the more I’ve trained as part of the squad, the better I’ve felt.

“The gaffer’s told me to be patient, which I have been and I respect his decisions. I’m just going to keep my head down and keep working hard because it’s up to the manager what the team is.”