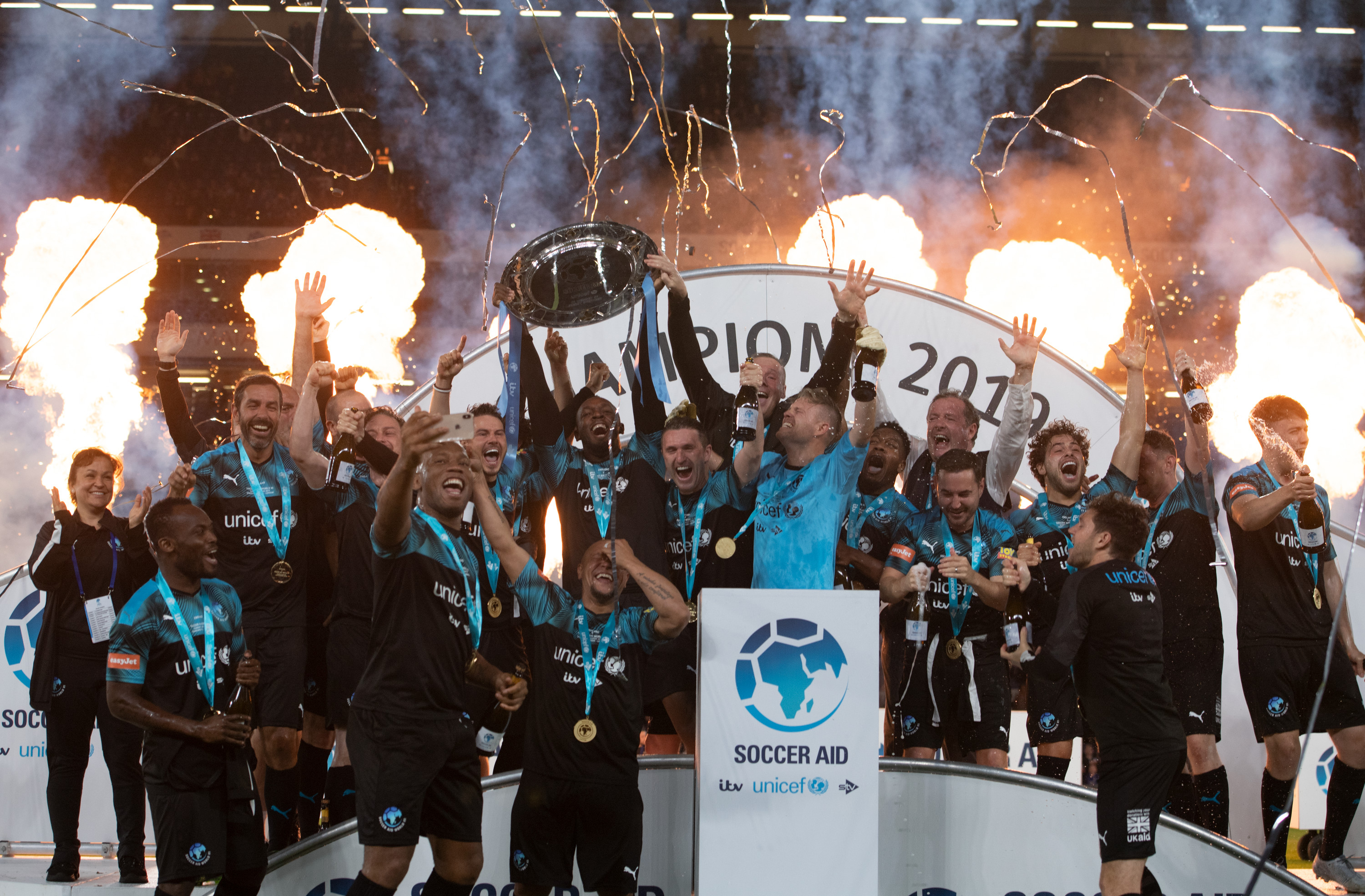 Soccer Aid for Unicef today announced that the 2019 campaign raised a record-breaking £7.9m – with 100% of the money going towards Unicef’s vital work around the world saving lives and helping children grow up happy, healthy and able to play. The Triple S Group play a pivotal role in Soccer Aid, with Triple S Events helping organise and produce the show, and Triple S Communications helping manage the media and PR for the campaign.

The star-studded match, which was broadcast live on ITV and STV on Sunday 16th June has surpassed previous fundraising records thanks to the public, ITV viewers, corporate partners, a host of A-list celebrities and the UK government – who matched donations up to £3m. £1.1m more was raised compared to the 2018 fixture. This means that to date, in excess of £38m has been raised since the first match 13 years ago.

It was also revealed today that next year’s game, due to take place during June 2020, will return to the Theatre of Dreams, Old Trafford – the original home of Soccer Aid for Unicef where the first match took place in 2006. It will be the sixth time the match will be played in Manchester, with Soccer Aid for Unicef 2019 having taken place at the famous Stamford Bridge stadium in Chelsea.

Robbie Williams, Unicef UK Ambassador and co-founder of Soccer Aid for Unicef, said: “Soccer Aid for Unicef has smashed its fundraising record again this year and I couldn’t be happier. The match continues to go from strength-to-strength raising vital funds for Unicef and all the lifesaving work they do for children around the world. Thank you to everyone who helped make this year’s event the most successful campaign yet!”

International Development Secretary Alok Sharma said: “Soccer Aid for Unicef raised a record sum of money this year, thanks to the incredible generosity of the British public, meaning the charity can reach even more of the world’s most vulnerable children. Through UK Aid Match, the UK government has matched pound-for-pound public donations up to £3 million, doubling the difference the appeal makes to children’s lives.”

Ed Woodward, Executive Vice-Chairman, Manchester United FC, said: “We are delighted to welcome Soccer Aid for Unicef back to Old Trafford next year. It’s always an enjoyable and entertaining day and it’s a privilege for us to host the game which raises funds for such a vital cause.”

Jim Clements, Director of Soccer Aid, said: “We are immensely proud that Soccer Aid for Unicef has raised more than ever this year and continues to be a firm favourite with the British public. People have been hugely generous, and we’ve been able to double the difference made to children’s lives thanks to the UK Government matching public donations. We’d like to say a huge thanks to Chelsea Football Club and the Stamford Bridge crowd for being such great hosts earlier this year and to ITV for broadcasting the event.”

Bruce Buck, Chelsea Football Club, said: “Everyone at Chelsea Football Club was thrilled to host Soccer Aid 2019 and help contribute to a record-breaking year for money raised. Working with charities is ingrained as part of the culture of our club and we are delighted to be able to help support more communities at home and abroad.”

Soccer Aid for Unicef 2019 took place in London for the first time in more than a decade, selling-out Chelsea’s Stamford Bridge. The match ended in a 2-2 draw, leading to a nail-biting penalty shoot-out for the second year in a row, with the Soccer Aid World XI eventually beating England 3-2.

For the first time in Soccer Aid for Unicef history, the game saw female players take part in the match, with ex-internationals Katie Chapman and Rachel Yankey taking to the pitch for England, while Brazilians Fran and Rosana donned the Soccer Aid World XI shirt.

To be the first to hear all the latest news about Soccer Aid for Unicef register at  www.socceraid.org.uk.